Pain is a transgressive experience capable of turning a human being into an animal. Even some little ache can make us break cultural taboos and swear, pronounce forbidden words. The stronger the pain, the more likely we are to revert to a bestial, biological dimension within. Along with an increase in biological urges, and a corresponding decrease in ratiocination, we can lose much—if not most—of our ability to express the transgressive feeling of pain through meaningful linguistic expression. At a certain stage, we can even lose the ability to shriek, to scream, to signal for help: we can become numb. All our acquired layers of civilisation, education, socialisation, and our internalisation of collective identities can simply fade away, and, if and when that happens, what is left harshly exposed, under all our cultural masks, isn’t a nude body: it’s an open nerve laid bare, signalling the enduring, traumatic suffering of what little is left of what once was a human being.

Not only does unmitigated pain have a demonic—Circean—power to turn humans into animals, it also throws us sufferers from it into the void of existential loneliness. It is not only our voice that disappears in such an abyss, but also our ability to see the world and other humans in it. The greater the suffering, the less we can make sense of our environment, and the more we immerse ourselves in our agony. Loneliness, voicelessness, blindness constitute the suffering subject.

Paradoxically, this kind of pain is not only a door to absolute solitude, but also a portal to collective, transpersonal experience. Pain creates an entire existential hierarchy: torturer above; victim below.

The figure of an executioner is always hovering near—and hanging over—the sufferer. An ancient art of torture is vested in the ability to bring a victim to the deepest limbos of pain without allowing them to ‘dizzy out’. The torturer should guide the victim all the way down the long stretch of their Via Dolorosa, with all its station stops: discomfort, misery, irritation, ache, soreness, throbbing, stinging, hurting, agonising pain… and the endless humiliation that dehumanises the victim and übermenschises the tormentor.

Bystanders occupy a separate rank in this hierarchy of pain. Pain—even if it is someone else’s pain—leaves no one indifferent. It turns viewers’ eyes inwards, into themselves, even if they remain aloof, dispassionate witnesses. The magnetism of somebody’s suffering reveals the fact that pain is an experience which demands unconditional attention. So neutral bystanders pay attention to pain and forget of torturer.

Defenders occupy the next rank down in the tormentor-victim hierarchy. Defenders emerge in response to spectators who are engulfed by the experience of agony. Being unable to calmly witness somebody’s ordeal, defenders come forth as three deities: Asclepius, Morpheus, and Thanatos. The first tries to mend the harm and cure the victim, to make the cause of the pain disappear. The second goes straight to the open nerve and brings the gift of anaesthesia. He doesn’t cure the victim or restore their humanity but makes it possible for them to suffer less until the end comes. And the third deity brings the end, the dead end.

Even deeper, there is a compassionate fellow. Not a deity, but just another human being who is selflessly prepared to share in—and take on—the victim’s torment. The shared burden helps restore the human dignity of both victims and fellows. The suffering may go on, up to the imminent approach of death, but the common cause, the fellowship, grant both victim and fellow victory over the torturer.

And finally, the end of limbo for the victims arrives. 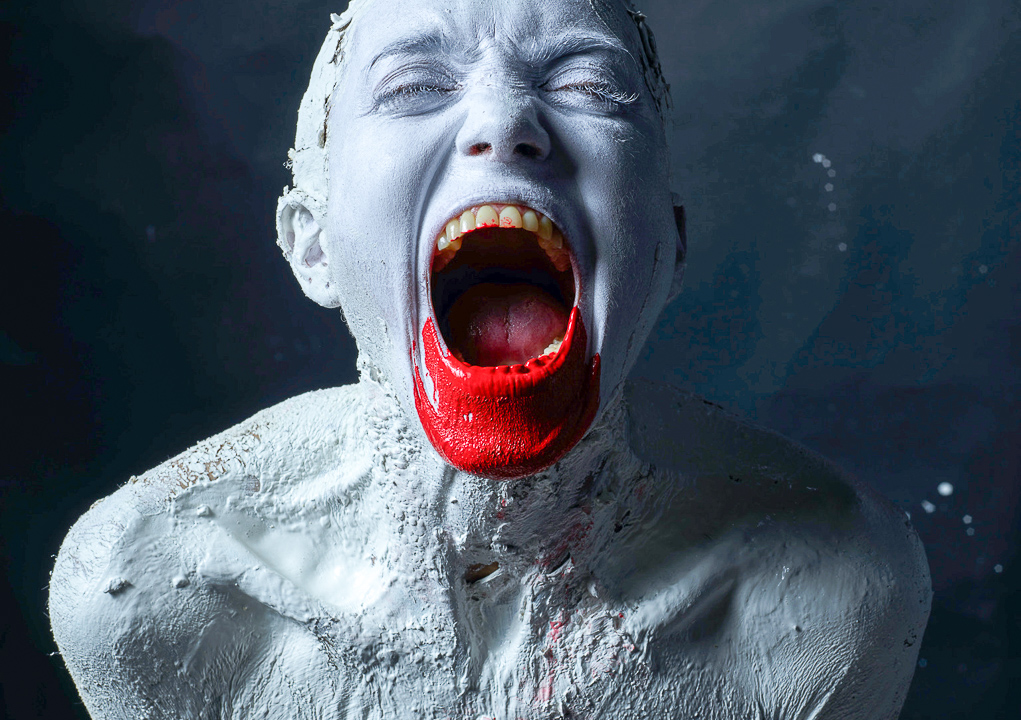 Or is it the end? The criminality of torture, the woe of suffering and the effort of helping bring into existence something that acts even after the victim’s end. Imps, evil demons, and heartless golems inhabit the underworld of pain.

In his visual study of pain and humiliation, Alex Blank shines a light into this underworld. His images of suffering and torture tell the untold stories of those who were silenced in the Holocaust and in many other forgotten mass murders on Kievan soil.

He starts his story with golems, the piles of same clay from which the Almighty made Adam and the same golem-like figures which have survived right into our times in antique statues and Pergamon bas-reliefs. Once brightly coloured, after the torturous ravages of time, they have turned into grey protoplasm, reminiscent of some aspects of their aloof spectators. And Blank dully reports of their strange co-dependence.

According to Blank’s narrative, these bodies move on and learn about themselves and others around them. And they learn of truth, sin and punishment. Thus, some turn into torturers; some become victims. And their division makes colours return: red for blood and black for suffering.

Then demons emerge from the black holes of the victims’ open, muted mouths. From the relics of Praxiteles’ style, the photographed scenes develop into Boschian imagery, where humans, demons and animals lose their differences in an ocean of pain.

Yes, pain is a transgressive experience capable of turning a human being into an animal, but it can also turn an emptied bystander into an empathic friend, into a partner who is willing to share (in) the pain in spite of all the primeval instincts that go against that very urge. It is up to us to choose what to share: crime or suffering? And while we peruse this album, we make our choice.

Photos used for this publication are all from “Pain. A Photo Album” by Alexander Blank (Kyiv: Laurus, 2020).