Considering Werner Herzog’s intention to direct a horror film without blood and gore, it is truly unclear what kind of horror “My son, my son, what have ye done” reckons with. In conjunction with seemingly weird non-sense that permeates the main characters’ apparent conduct and dialogues between them, forcing (be it successfully or not) a spectator to laugh without her/his knowing the real reason as to what makes the plot funny and discomforting at once, this movie introduces dramatic aftertaste guaranteed by the characters whose dull and serious countenance keeps unchangeable all the time. Herzog gets rid of the traditional whodunit situation endemic to the detective genre, and obliges us to collect the dots of why’s, related differently by the murderer’s acquaintances. The plot rests on the mother-son literally dead-end relationship, which goes in parallel with flashbacks depicting son’s rehearsals of the Greek tragedy: in the fictional universe, Orestes kills his mother; he executes the vengeance upon her and saves the world, cutting off abhorrent incestuous bonds which previous generations mixed up with. In opposition to that, real-time estranged son, played by theatrically intense actor Michael Shannon, murders his mother — Grace Zabriskie, who shows up on the screen, wearing her crazy mother archetype, top-notch Twin Peaks look. Is it a shimmering obsession with putting a mythical fiction into practice, externalizing it so that reality ultimately distorts the original vision and corrupts the bookish nobility of the tale about vice and crime? Is it an obsession that negatively affects a fictional flavor of the exceptional son’s mission and outshadows his vengeance calling forth a reversed respect towards mother? The abovementioned seriousness, which is central to the film’s mood, gives away an unrealistic environment out of nowhere, unrealistic people disillusioned in something that keeps appearing primarily on the pages. Brad the murderer (the main character and the Greek Orestes), so to speak, reproduces tragedy’s verses, which profoundly resonate on some off-screen level. He neglects the external attributes of the original story, namely such almost unnoticeable historical formalities as clothes. A theater director (Udo Kier) complains about irrelevant clothes and a Japanese sword Brad borrowed from his crazy uncle (a farmer who raises ostriches) because these small details have nothing to do with Greek back-then “fashion” alongside cultural circumstances.

He sporadically chooses the random unimportant things he could grab his hands on, things that don’t matter anyway. Brad exploits a fictional world, full of outdated longings, to rehearse a real looming murder, premeditated but spontaneous, theatrically impeccable, and eloquent as if he was a literary character exercising universal justice. Yet the murderous deed is invisible for the spectators who have access exclusively to the closest friends’ and actual witnesses’ more or less neutral versions of the whole situation that percolates through Brad’s perspective. This world doesn’t have the room for outdated Clytemnestra and her vengeful son who pursuits the restoration, which promises harmony of tranquility a person gets when everything is in the right place. 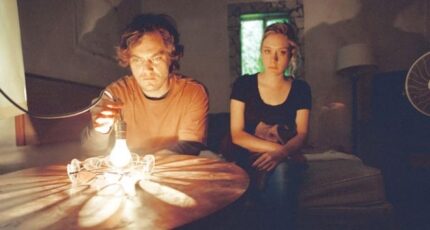 At large, the circle of vengeance exemplifies the need to nullify the existing element, which should have fitted the natural mold, by bringing about a synonymous one. Murder requires a symmetrical murder bestowing balance upon the system. Despite Brad’s assuring people that he discovered the unwobbling pivot, the motif of symmetry and gory vengeance suggested by the internalized severe law is lacking here, in the trivial reality which abides by the rules of non-sense. Cinematic Orestes doesn’t want to get revenge on his mother whom he loves more than his fiancée. “Why the whole world is staring at me?” — asks Brad aiming to reach the off-screen dimension, to make spectators the accomplices of the crime. Far from those horror genres, which put emphasis on immersing a watcher into the villain’s sensations with the help of the first-person angle, Herzog’s counter-detective horror undermines a visual opportunity to be indistinguishable from the main character, to tremble at the thought that you indirectly participate in murderer’s designs. Herzog creates a theatrical performance on screen: actors in the middle of dialogues suddenly freeze up, looking at the camera as the music continues to hold sway over the entire scene and punctuate the presiding artificiality of what we are dreaming of.